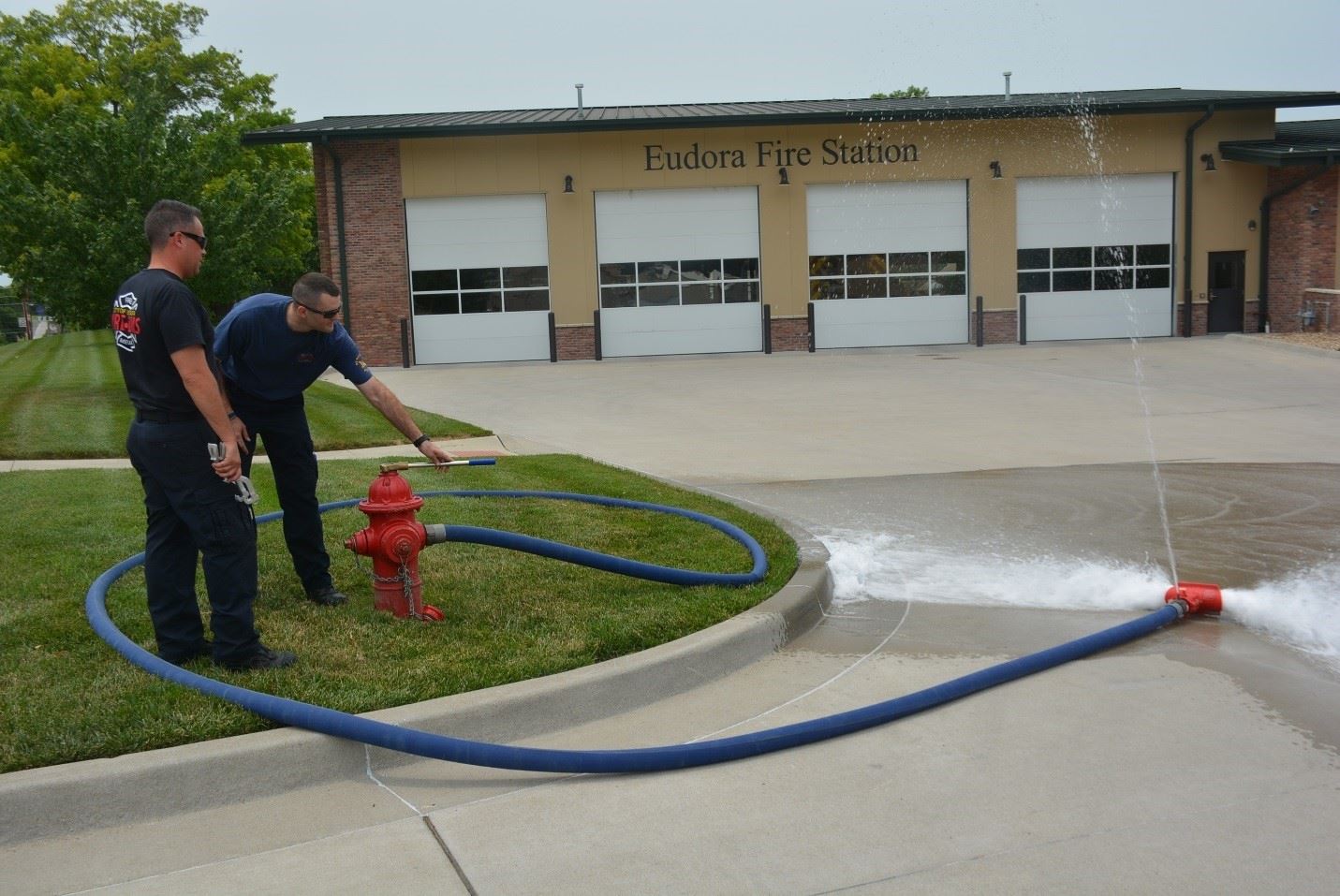 Beginning June 2018, the City of Eudora Fire Department will be performing water supply testing of all fire hydrants throughout the city. Firefighters look for potential problems when checking fire hydrants, including the following:

Any problems found are referred to the City of Eudora Water Department for repair or replacement. Fire Testing and Maintenance Definitions The fire department will be measuring static pressure, normal operating pressure, residual pressure, and flow pressure. Static pressure is the normal operating pressure on water distribution system before a hydrant is opened. Normal operating pressure fluctuates during the day and night. It is the pressure found in a system during periods of normal consumption. Residual pressure represents the pressure remaining in the system at a specific location when water is  flowing. The residual pressure at the hydrant is measured and recorded while water is being discharged from another hydrant.   The flow pressure is forward velocity pressure at a discharge opening at a hydrant discharge while water is flowing. The velocity of the water stream exerts a pressure that is read on a pitot tube and gauge. The flow of a hydrant varies for several reasons. First and most obviously, the proximity of feeder mains and the size of the mains to which the hydrant is connected have a major impact on the amount of flow. Sedimentation and deposits within the distribution system may increase the resistance of water flow. Older water systems may experience a decline in available flow. Once hydrants are tested, the data collected is posted on a map showing hydrant location, color codes, and hydrant identification number.  For further information contact the City of Eudora Fire & EMS Department at (785) 542-3653 or the City of Eudora Public Works at 785-542-3100.

Why is it necessary to test fire hydrants?

Regular hydrant testing is a significant component of any water supply distribution system.  It is important to periodically test all fire hydrants to determine how much water the hydrant can flow in the event of a fire.

How do they keep fire hydrants from freezing?

In areas of the country where freezing temperature regularly occur, the hydrants are equipped with a drain valve located well below the frost line.  When the hydrant is shut off, the drain valve automatically opens allowing the water to drain back into the water main, leaving the barrel of the hydrant empty.

What is typical water pressure at a fire hydrant in Eudora?

Yes.  The water mains providing water to your home is the same water that is used to fight fires.

Why are tops of hydrants painted assorted colors? City of Eudora residents may notice that fire hydrants are painted assorted colors in different areas around town.  Firefighters can make better decisions affecting a fire attack if they know the relative water flow of hydrants in the city. A secondary purpose for painting hydrants is that they become more visible.  The City of Eudora Fire Department has adopted the NFPA system of color coding:

Why is the water coming from my faucets cloudy?

Conducting fire flow tests and flushing hydrants are a routine component of a good water distribution maintenance program.  When a fire hydrant is opened, the velocity of the flowing water disturbs sediment at the bottom of the pipes and the water turns cloudy.  To correct this, open multiple faucets in your home until the water becomes clear.

Is cloudy water safe to drink?

Drinking a refreshing cold glass of water is a great feeling.  Cloudy tap water, sometimes referred to as milky or white water is likely due to trapped air or a build-up of dissolved particles in the water pipes.  It is important to note the cloudy water from the tap is completely harmless.